Let’s talk about the wondrous world of fermentation.

Fermentation has been a part of human life and in almost every culture around the world since the beginning of time. So, why has it been around for so long and why is it not exactly commonplace in our culture today? Fermented foods and drinks were some of the first processed foods made and consumed by humans. The goal of fermentation is to process the food with bacteria and enzymes to lengthen the shelf life of milk, fruit, vegetables, grains, and meat products. Furthermore, an added benefit is that fermenting often improves the taste and nutritional value of these foods.

Fermentation of foods takes place when a food product is exposed to bacteria at a particular temperature and left for a period of time. Let’s look at kefir as an example. A quart of milk is exposed to kefir grains (simply a grouping of bacteria and yeast) and allowed to rest for 20 – 48 hours at room temperature. As bacteria eat and grow, they produce metabolites such as organic acids, ethanol, and bacteriocins (proteins that inhibit the growth of other bacteria – think the bad guys). The acids produced lower the pH of the product. This makes it look very uninviting to pathogenic bacteria. The vast majority of disease-causing bacteria require a pH range of 4.6 – 7. 5. This is also why the stomach is designed with a low pH – as an effort to kill off any bad bacteria that may be lurking in that salad.

In the fermented milk example, Lactobacillus is the primary bacteria found in kefir grains. They will utilize multiple types of sugars, but they love the lactose found in the milk. The types of metabolites produced are dependent on the bacteria and the food source.

During fermentation, microscopic bacteria make teeny tiny chemical changes that break down larger, less flavorful compounds. Fresh olives on their own are intensely bitter and not something anyone would choose to snack on or use to add flavor to a dish. However, the fermenting process removes those bitter chemical compounds and brings out the flavor of the olive. These probiotics add benefit to the human gut microbiome primarily through competition with pathogenic bacteria. Just think of the human microbiome as a town with limited food sources and growth space. When these transient beneficial bacteria stop in to stay hello, they take up some space and food sources the pathogenic bacteria would like to utilize to establish a nice home.

The Tasty and the Bizarre

Recently, a renewed interest has arisen in pop culture about all things fermented. The fermented tea, kombucha, went from being the favorite of your unusual hippie aunt to being found in abundance in most grocery stores across the country.

A Korean staple: cabbage, other vegetables, and spices are cultured in their own juice and brine for 4 – 15 days.

A popular Japanese fermented dish made of soybeans. The fermentation process drastically reduces the anti-nutrients in soybeans.

These forms of fermented cassava found in West Africa developed to preserve and reduce the anti-nutrients found.

A combination of bacteria, salt, and a reduction of water through smoking and/or drying is used to preserve meats of all varieties in cleaned intestines. Most countries have found ways to preserve meats using this method. Regions including Europe, China, the Middle East, and beyond are known for their native flavored meats.

Up to 500 whole Auk, a type of small bird, are preserved in the hollowed-out body of a dead seal (beaks, feathers, and all). This turducken-like bundle is left to ferment under a rock for three months. This Greenland Inuit food is used to celebrate Christmas, birthdays, or weddings.

Fermented foods have a place in this modern world.

These traditional and healthy foods require time and patience, something that is difficult to come by as we rush through our busy days. However, it is possible, and certainly, it can be fun! Many commercially prepared foods that are traditionally filled with probiotics are heat-treated to increase shelf stability. For example, jarred pickles and canned sauerkraut you may see on the grocery store shelves undergo temperatures too high for bacteria, both bad and good, to survive. Reach for products with labels that say ‘contains live cultures.’ While sourdough is delicious and a fun hobby, it does not contain live cultures after baking.

A common question we receive at Entegro Health is if people can take our naturally fermented product while consuming fermented foods. To which we respond with a resounding: YES! Research is finding gut microbiome diversity to be a common finding in healthy individuals. Furthermore, the definition of probiotic from the International Association for Probiotics and Prebiotics (ISAPP) is “Live microorganisms that, when administered in adequate amounts, confer a health benefit on the host.”

Naturally fermented, our probiotic utilizes time and temperature to maximize the beneficial bacteria’s environment. A small daily dose of Flourish is an easy way to ensure your body is nourished in the traditional way, without the time hassle. 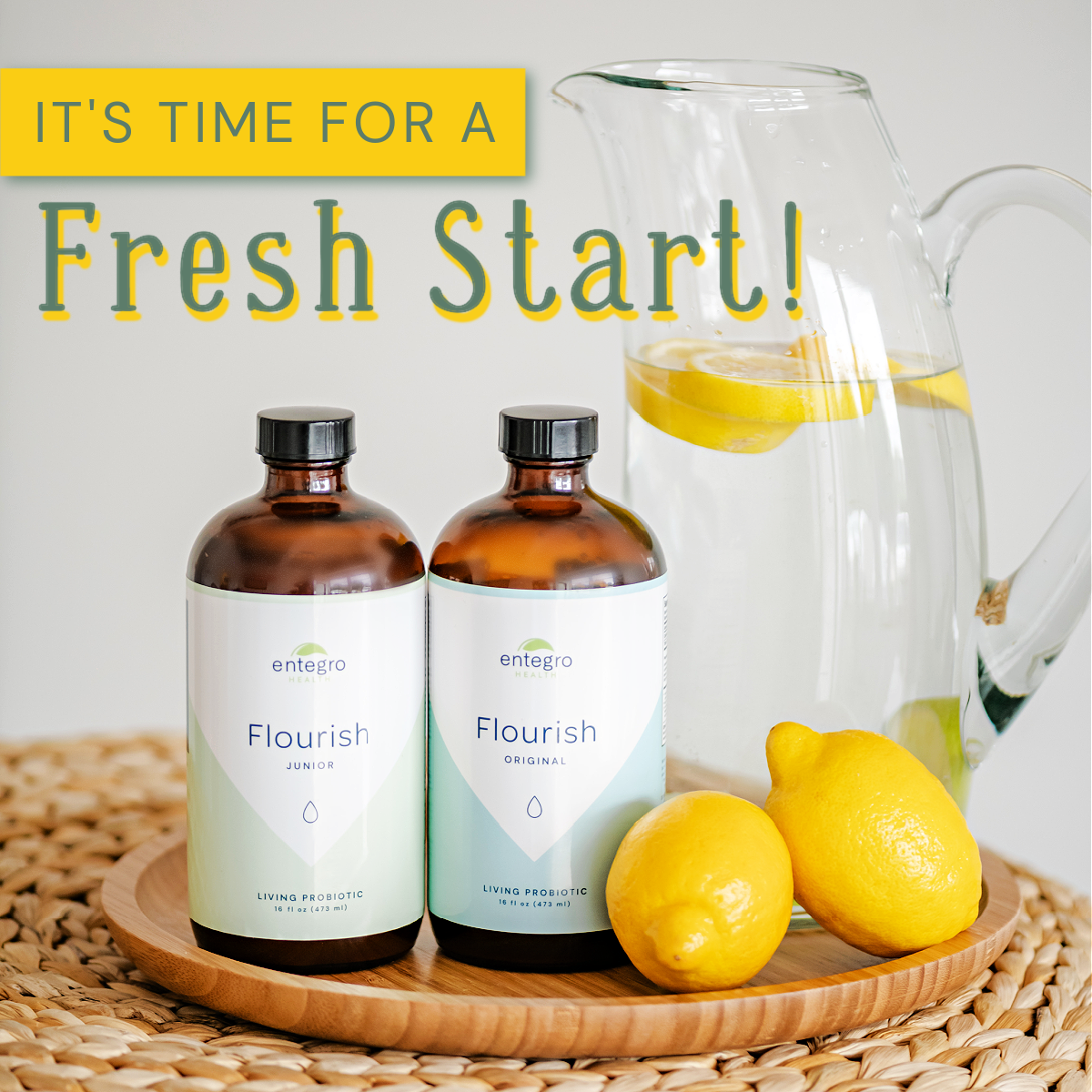